Blast the Bush by Len Beadell.

Blast the Bush by Len Beadell.  Hardcover book published by Rigby 1967 (first edition), 212 pages with some black and white photographs and illustrations. 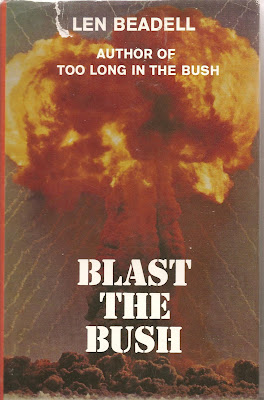 Before I began my wonderful and adventurous life as a bookseller, Len Beadell was a complete unknown to me.  One day I stumbled on a few of his titles and I found out pretty quickly that they sell.  Not that I’ve ever made enough to retire on, but Len’s books tend to turn over and a small profit is able to be made on second hand Len Beadell books.  Hardcovers, softcovers it doesn’t really matter, people love this guy.

So who was Len Beadell?  The simple answer is that he was a road worker… actually he was a surveyor and roadbuilder.  The slightly more glamourous answer is that he was a later day Australian explorer who opened up vast areas of the Australian outback between 1947 and 1963.  He did this by building a network of outback roads, also known as highways, across Australia.  There’s a great map and more information about Len and his work here.
This particular book looks at Len’s adventures locating and developing the site for the testing of Britain’s Atomic Bomb here in Australia.  He was obviously the man for the job and from all accounts he did a great job.  He was even responsible for the town survey for Woomera, which was the town that was built to support the Woomera Test Range… and this is where this particular copy of this book, gets interesting.  Len signed it.  Not only did he sign it but he wrote an inscription in it as well.  It reads:
To:-
Mollie & John Donaldson.
With many thanks for the first aid instruction at the Woomera hospital which helped us survive in the outback.
Best wishes
from:
Len Beadell
May, 1967 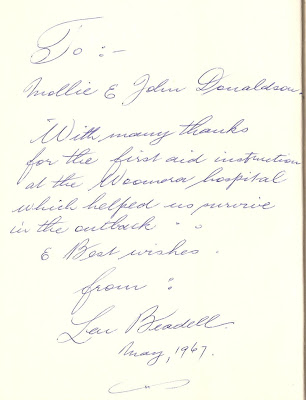 I find this sort of inscription exciting.  It’s not just to “Mollie & John”, Len has taken the time to explain within the inscription, why he has inscribed the book to “Mollie & John”.  He obviously thought enough of them to do this.  This also says something about Len himself.  He could of written something a bit simpler, but decided not to.  Finding a book like this is all part of the adventure of bookselling.  I love it.
Posted by robin at 4:42 AM