Only once in my life have I had the need to seriously consider buying a book at an airport.  It was for a flight from Frankfurt to Delhi and I had just finished reading whatever the book was that I had been reading and in desperation began to consider the airport as a prospective place for the purchase of reading material. The benefit of an airport bookshop/bookstall/newsagency is of course that they are more likely to have books in English which is not always that easy when your travelling in non English speaking countries. The downside is of course that airports tend to sell airport fiction.
So why do i need a book for the plane?  It’s a long way from Frankfurt to Delhi and quite honestly I couldn’t think of anything worse than inflight movies or inflight radio being my only form of entertainment for that amount of time.  Of course things are a little different now with multichannel video players and the ability to watch the map that indicates where you are in the world at any given point in time (stimulating). But back then, and it wasn’t that long ago, a book was a real necessity for a long flight.
Airport fiction.  Not really an interest of mine.  Tom Clancy… not interested, Particia Cornwall… not for me, James Clavell… I don’t think so and John Grisham, well I tried him once but to be honest, it didn’t grab me at all… despite an enthusiastic recommendation at the time.  Anyone reading this who likes these writers (or others of the same ilk), and there are many of you out there, I think that it’s great that you like it… it’s just not for me.  So it was with great trepidation and a little anxiety that I began my quest/perusal of the Tom, Patricia, James and John filled shelves at Frankfurt airport.
To cut a long story short.  I ended finding and purchasing: 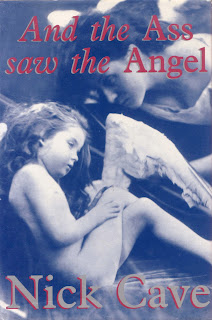 And the Ass saw the Angel by Nick Cave.  Hardcover published by Black Spring Press 1989 (first edition).
… although mine was a paperback… and not a hardcover first… which is what I currently have for sale… which is why I’m writing about it here in this blog.
Wikipedia describes airport fiction as, “fast paced and easy to read.” Oh boy.  I didn’t know that that was what I’m meant to buy at the airport.  Fast paced and easy to read is not how I would describe Nick Cave’s first magnum opus.  It’s been a few years since I read it but I do remember thinking that it was a little verbose and not necessarily an easy read particularly with children crying, people brushing past on their way to the toilet and people snoring (in the plane… not in the book).  Overall I thought the book had some great moments and I have stuck to this point of view ever since… “fast paced and easy to read” it ain’t.  So sadly my one and only moment of airport fiction wasn’t strictly speaking “airport fiction”… although if I bought it at an airport and read it on a plane, then…
Posted by robin at 3:25 PM