My Broken Love: Gunter Grass in India and Bangladesh

My Broken Love: Gunter Grass in India and Bangladesh, compiled and edited by Martin Kampchen. Hardcover book published by Viking / Penguin (India) 2001, 303 pages with a few black and white photographs and illustrations. 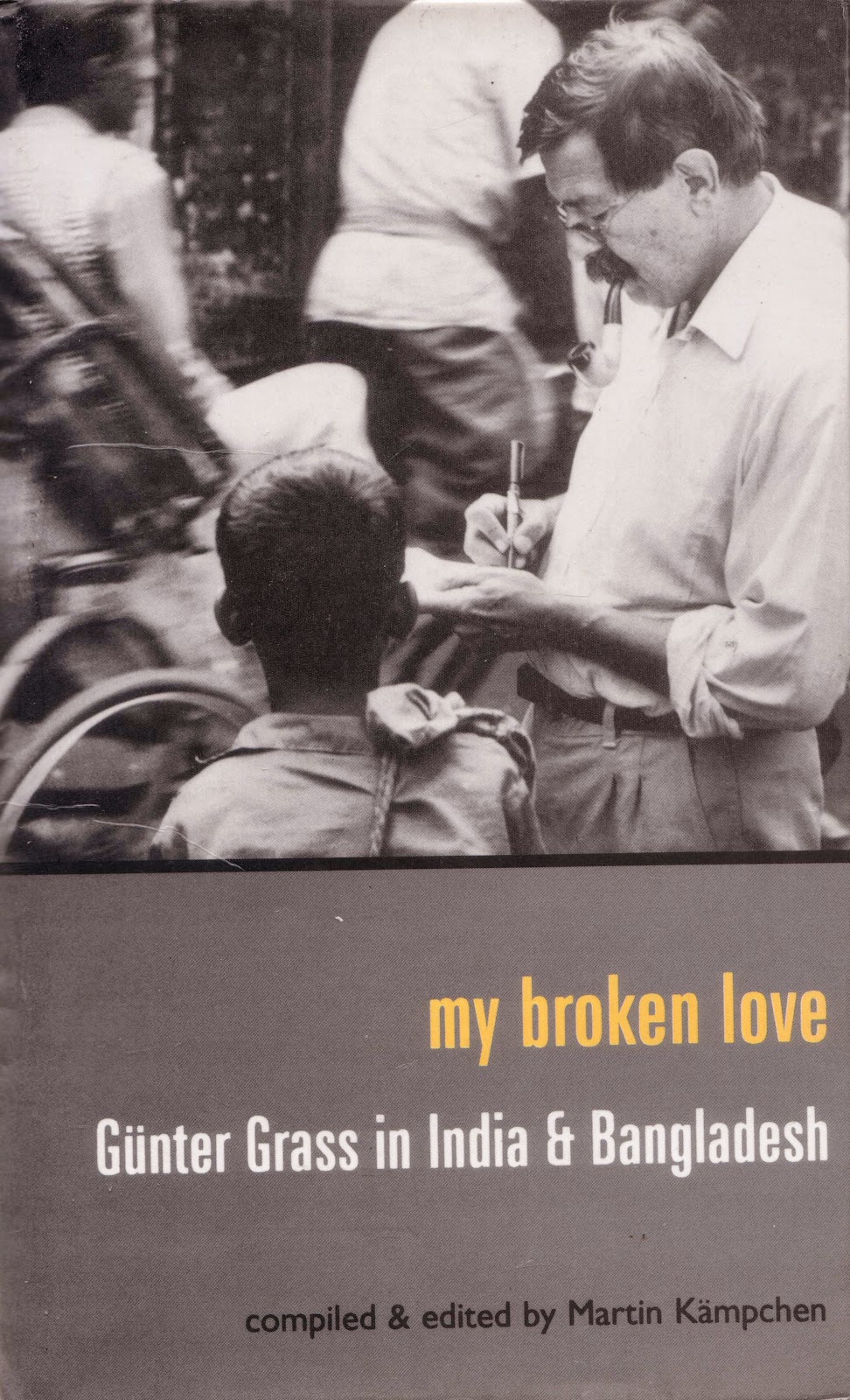 “In 1975 when the German novelist Günter Grass, winner of the Nobel Prize for Literature, 1999, visited India for the first time, he singled out Calcutta as a city he would definitely return to. The abject poverty in which many in Calcutta lived, juxtaposed with the throbbing vitality of the city and the tremendous will of the people to strive against the odds, evoked in Grass a strange mixture of attraction and disgust, but also left him utterly fascinated. Grass did return to Calcutta eleven years later, this time with his wife Ute, to live there for a year as ordinary residents of the city. Even though the couple eventually spent only a few months there, the experience left a lasting impression on Grass, Ute and the people who came in contact with them. Calcutta affected Grass in some indefinable but significant way, just as he had touched the lives of many through the friendships he struck up, his support of social causes, and his efforts to promote the role of the creative artist in politics. The encounter also resulted in Zunge zeigen (Show Your Tongue), a diary published in 1989, in which Grass approached Indian reality through prose, verse and a series of black-and-white sketches. My Broken Love is a rich collection of all the material available on Günter Grass’ sojourn.”

If your thinking that you've never heard of this book and are wondering what the hell has Huc & Gabet stumbled upon, then you are thinking exactly what I was thinking when I found this gem. I've got a copy and have read “Show Your Tongue”, his Calcutta book, so the whole Gunter Grass in India thing was not a suprise. Having spent more time than I probably should have in Calcutta, I get why Gunter chose to spend his time in this most amazing of cities. It's hard to describe or explain what is so fascinating about the West Bengalis and their sprawling and at times incomprehensible metropolis. There are lots of contradictions and just when you think you have it all figured out you realise that as an outsider you really have no idea at all... which is sort of like the rest of India, except Calcutta is just that little bit more amazing. The last time I was there, I did notice that it was getting harder to walk along the streets as the footpaths were becoming more impenetrable with human mass, and physically bumping into everyone around you was an unavoidable event... Unfortunately I didn't bump into Mr Grass.


This book contains interviews and articles, some of which are by Gunter himself but most are by others and I guess the idea behind the book is to document this most important of writers visit to this city. The book was published in India and i've got a feeling it didn't hit the printing presses anywhere else. Due to the online scarcity and my complete ignorance as to this books existence despite being an avid consumer of Gunters work, i'd venture a guess that not many copies made it out of India.
Posted by robin at 2:16 AM