Raymond Island: Past, Present, Future by Midge Beesley.  Hardcover book published by the author 1986, 291 pages with some black and white photographs. 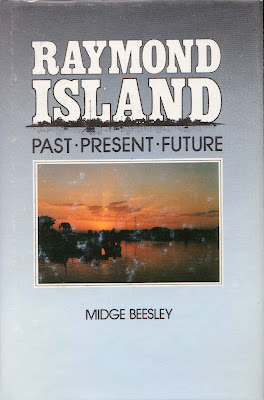 The island is connected to the mainland via a chain ferry and there has been quite a bit of discussion over the years as to whether a bridge might be a better option.  Apparently, opinion is divided.
“The Raymond Island ferry is the distinctive feature that makes a visit to the island different to any other small township in Victoria.  It is the visitor’s introduction to the island’s thirteen square miles of wooded tracks and sandy beaches that as yet, are comparatively untouched by development, and the fact that the ferry is free adds to the charm of the journey across the mere 150 yard stretch of water.” Page 191
I think this is a clear indication as to the authors opinion on the matter.  A bridge could of course threaten the thirteen miles of wooded tracks and those sandy beaches may become a little more congested with all that extra traffic that a bridge would bring, so I guess the issue will continue to rear and rage for many years to come.

This book has been signed by the author and has a name written on the same page.  More than one person has contacted me since I listed it on line, wanting to know whose name it is. This is a little bit strange as I’ve never had this sort of inquiry before or since.  When I mentioned this to the Raymondians that visited us here in Clunes, they weren’t surprised and explained that the books owner was probably known to most of those with any connection to the island… and then wanted to know whose name was in the book.  In other words the big question is, who has gotten rid of their piece of island history and why.  This is all small town stuff and to be honest not really that suprising other than a slightly more aggressive patriotism than any small community normally has.

I still haven’t been to Raymond Island as it’s not really an area of Victoria that I have visited oft.  I wouldn’t hesitate in visiting it if I was there and by all accounts it is worth a visit.  When i do go, I might take this book along… and possibly find the original owner and answer everyone’s question.