Conjuring as a Craft by Ian Adair.

Conjuring as a Craft by Ian Adair.  Hardcover book published by David & Charles 1970, 160 pages with black and white photographs and illustrations. 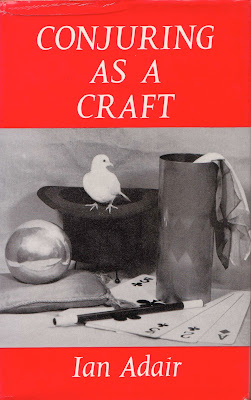 The idea of a Magician performing their craft conjures up all types of magical images.  Who hasn’t seen a rabbit pop out of a hat or a lady cut in half… to be honest, I haven’t.  I’ve only ever seen this sort of thing on the telly, but I think you get the idea that these are the images that we all know and love whenever we think of magic.

The author of this book is still performing his magic despite retiring a few years back and has written a number of other books and articles, besides this one, over the years.  His works include 3 volumes of The Encyclopedia of Dove Magic… that’s a lot of Doves.  There are no Dove tricks in this book.  I guess the author was saving them all for his magnum opus... or possibly he'd already made them all disappear and there were none left (???).  As far as I can tell, there are also no rabbits or half ladies (or half rabbits) in the book. There are plenty of card, coin and other tricks though to get one started in the world of magic tricks. Maybe live animals (including humans) is something for the more experienced magician. I’m not a magician so I can’t really write what is appropriate for a novice to begin with, but somehow I think cutting a lady in half is something you need a bit of experience to do.

Many years ago I was catching a few “interesting” live bands in a cabaret setting in Melbourne (Victoria, Australia), when all of a sudden. in between a band featuring a Dalek on drums (yes, one of those Dr Who baddies) and a band of make believe Greek musicians (I don’t think any of them were Greek… but they were all having a good time), a magician rolls his table of tricks out on the stage.  I can’t remember his name, but I do remember some very drunk patrons getting as close as possible to the action.  The magician was not phased and let them watch.  So these guys are watching every move as close as possible and occasionally yelling out when they think they have figured out what's going on.  The magician is of course doing something completely different and just keeps on calmly baffling the inebriated and disappointed magic fans who continually cry out “No way”.   What’s interesting is that I didn’t really see the tricks and what I vaguely did see I don’t remember.  What I do remember is the drunk guys being unable to figure it out.  Somehow this guy impressed me… the drunks also impressed me... and the Dalek really impressed me.
Posted by robin at 3:33 AM