They Dined on Eland: The Story of the Acclimatisation Societies by Christopher Lever.

They Dined on Eland: The Story of the Acclimatisation Societies by Christopher Lever.  Hardcover book published by Quiller Press 1992, 224 pages with a few black and white illustrations. 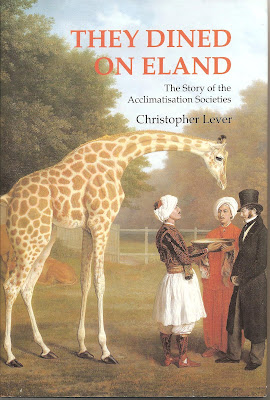 Acclimatisation.  Now there’s a thing.  Here in sunny Clunes we have a number of constant reminders regarding Acclimatisation.  Not only do we have an ample amount of rabbits and hares (…causing environmental damage on a massive scale), but we also have the foxes that eat the rabbits and hares (… and our native fauna*).  What is less obvious unless you sit back and think about it, is the large number of elm and poplar trees that grow in this small town.  That’s not to say that they aren’t obvious.  They are certainly large enough to be noticed and admired (… and scorned)… and they have spread their insidious suckers throughout the town… and my back yard.  I mention these as someone here in town commented to me once that the poplars and elms were introduced as part of an acclimatisation program in the 1800s.  This is of course completely unverified but worth a mention. 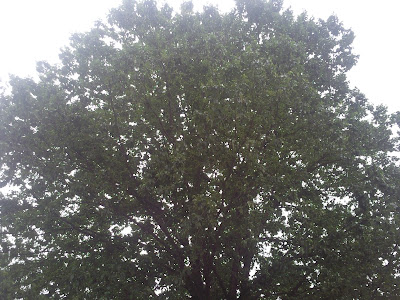 Large Elm tree in my backyard.


You’ve probably already gathered that I’m not a fan of the cute bunny, the sly fox or the majestic elm.  For some strange reason I like the stuff that was here before the imports arrived. Give me a Wallaby and a gum tree any day (both are within easy walking distance from where I now sit but are not within view).  Of course, one could argue that humans are imports as well… but somehow I think that efforts to remove humans may prove as difficult as the attempts to remove the fox and hare.

This book looks at the Societies that helped propagate these disastrous imports (not the humans).  Founded in the mid 1800s, these societies were trying to bring some of home to here and some of here to home, here being wherever you are in the world and home being Europe.  They were also looking at the economic benefits of importing various animals across the globe.  I guess farm livestock is an understandable economic import but the rabbit is something that in hindsight is a little hard for most of us 21st century humans to comprehend.  I guess times have changed and not all of us are hunters… although there are enough rabbits and hares around here to feed a lot of people for a long time.

I’ve had this book for sale on ebay for a while now, with no takers.  Maybe it’s just me that finds this subject of interest.  As with many of the books I try to sell, I still have confidence that it will sell despite not selling at this point in time.  It’s not rare and it’s not expensive.  It is interesting and it is relevant particularly to us here in Australia.  I often mention books that I would read if there was the time to read all the books that I want to read and this book is another one I could add to the imaginary pile of books that I would like to get around to reading some day.  If it doesn’t sell I think I will put it into the real pile and watch it Acclimatise with the others.

… and by the way an “Eland” is a type of African antelope and as far as I’m aware it was never acclimatised here in Australia and was never dined upon in Clunes.

* Causing environmental damage on a massive scale.
Posted by robin at 1:02 AM