A German Church in the Garden of God: Melbourne's Trinity Lutheran Church, 1853-2003, edited by Herbert D. Mees.  Hardcover book with pictorial boards (no dust jacket) published by Historical Society for Trinity German Lutheran Church 2004, 724 pages with black and white photographs, some colour photographs and a few black and white illustrations. 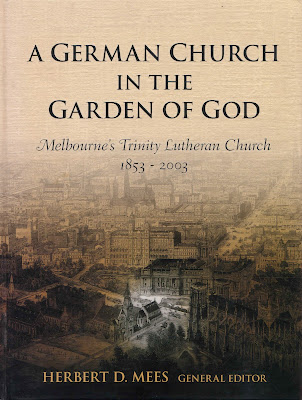 “The definitive history of the German Lutheran Trinity Church, East Melbourne. This book provides an insight into the life of German-speaking immigrants to Victoria and Australia. This 700 page book is profusely illustrated with over 350 photographs, lithographs, maps and other documents, including lists of early Church members. Also included is a 25 page section on the Thomastown (Westgarthtown) Lutheran Church.”

Germans have been here in Australia for a long time and I guess when people go to a new country such as Australia, they like to bring along some luggage (or baggage).  In this instance they brought along Lutheranism for which I guess they probably exceeded their baggage allowance.  No doubt they also brought along a fondness for bratwurst, sauerkraut, potato dumplings, red cabbage etc etc.  Unfortunately there is no history that I’m aware of, that looks at the history of sauerkraut in Australia... but there is this book that has nothing to do with sauerkraut.


1853 was the founding year of the Trinity Lutheran Church in Melbourne, Victoria.  1853 was also a significant time for Victoria as it was only a few years before this that the Victorian gold rush began to entice people from all over the world, including Germany, to try their luck here… especially here in Clunes and it’s surrounding gold rich land (…this includes Ballarat and Bendigo, but out of patriotism for my place of abode, I’ll put Clunes at it’s centre).  Melbourne grew at an accelerated pace as the gold began pouring in and there were plenty of Germans looking for gold and this is why those early Lutherans built a church at this particular time.

I was born in Melbourne a long time after the founding of the Trinity Church.  Despite being from a German background (both my parents were German), I have never visited this historic place of my ancestors countrymen’s baggage deposit.  There are various reasons for this which I won’t go into here in this blog, but lets just say that it wasn’t on my, or my families, radar.  This book on the other hand is on my radar as despite not having any first hand experience of the church, I am aware of its existence and importance to the Lutheran community here in Victoria.  At 724 pages, it’s not a casual look at this subject matter.  Geoffrey Blainey writes in his introduction, “This is one of the most comprehensive histories to be written on an Australian church” and lets face it, Geoffrey would be aware of any books that would be more comprehensive.  As an important part of Melbourne’s historic landscape, this history should be of interest to more than those with a penchant for sauerkraut or their descendents.  Anyone interested in Victoria’s history and society should find this book of interest.
Posted by robin at 1:22 PM