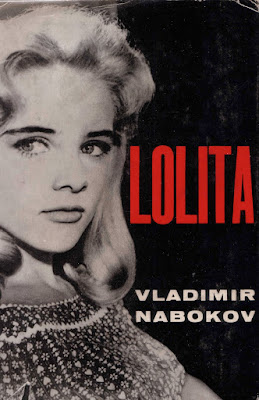 Lolita is a novel by Vladimir Nabokov, written in English and published in 1955 in Paris, in 1958 in New York City, and in 1959 in London. The novel is notable for its controversial subject: the protagonist and unreliable narrator, a middle-aged literature professor called Humbert Humbert, is obsessed with the 12-year-old Dolores Haze, with whom he becomes sexually involved after he becomes her stepfather. "Lolita" is his private nickname for Dolores.

Yep, she was 12 in the book. For the film, they raised the age of Lolita a few years but not as much as would make it acceptable that a middle-aged literature professor was lusting etc, after such a young girl. Despite this dodgy premise for a story, Lolita in both formats was and still is a success. It is considered one of the great books of the 20th century*, and it is also considered one of the books I really need to read... and yes I do have my own copy waiting in the pile.

I watched the film for the first time a few years ago and like most people, I was quite startled, amazed and gobsmacked. That doesn't mean that I didn't appreciate the film and the excellent job that Stanley did, or the excellent performances by all concerned especially Shelley Winters.


It does mean that I was a little taken aback by the subject matter and kept thinking all the way through that it was all a little bit dodgy. A great story but still dodgy. My copy of the book has been in the pile for a number of years now and a bit like a fine wine cellar, i'm waiting for the right moment to read it. Will there ever be enough time?

*Lolita is included on TIME magazine's list of the 100 best English-language novels published from 1923 to 2005. It is also fourth on the Modern Library's 1998 list of the 100 best novels of the 20th century, and holds a place in theBokklubben World Library, a 2002 collection of the most celebrated books in history.
Posted by robin at 11:23 PM