Gold at Gaffneys Creek by Brian Lloyd and Howard Combes. 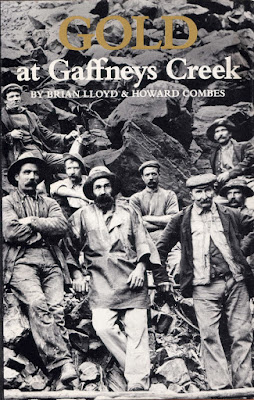 “The early goldseekers of Gaffneys Creek were tough, resolute and adventurous people typical of Victoria’s gold generation. This book is about the exploration, exploitation and settlement of that remote, inhospitable, but beautiful and rich corner of Victoria. The Gaffneys Creek goldfield was opened up by men who came across from the Buckland to the Big River in 1857, and climbed over the Mt Terrible range to the Goulburn watershed in 1859. There followed a few lawless years of rich alluvial mining before the reefers got to work, and permanent and law-abiding settlement followed. The wild speculative quartz mining boom of Gaffneys Creek and Woods Point in the 1860s was followed by decades of depression, with most of the mines closed or on tribute. The only miners to prosper were the tributers at the A.1, and even there they had to endure many years of barely subsistence earnings from the fickle reefs. The mining revival about the turn of the century saw some years of prosperity at the Dempseys and Rose of Denmark, but by World War I only the A.1. was left as a profitable mine. After the gold cut out there in the mid-twenties, more years of depression followed, until the Victory Reef was discovered in the early years of World War II. The 1940s were rich in gold and dividends for the A.1. but then, with rising costs and the price of gold fixed, the mine struggled on against mounting odds, until it finally closed in 1976.”

Gaffneys Creek? Another place of which my geographical knowledge was severely lacking in. Thanks to the interwebs, I now have a rough idea of where it is (between Matlock and Jamieson... and not close to here) and i'm fairly certain i've never been there... which is probably why I couldn't picture it's location. Besides being a local history book, this is also a book about Gold mining and the Gold Rush(s) that Victoria experienced over the years. With a few exceptions, the description above could easily be one of many towns in Victoria... including Clunes*. The dates are close to Clunes's, although mining stopped here earlier than Gaffneys Creek and it's that gold price mentioned in the blurb above that has historically hindered any further mining here in Clunes**.

Gold and Victorian local history are a good combination when it comes to books and the more obscure the book, the more desirable a publication becomes. I have another book by Brian Lloyd at the moment entitled “Gold at Harrietville”. It seems that Brian wrote a few books about mining towns in hard to get too places in Victoria as well as some other local histories, and as with the Gaffney's Creek book, the Harrietville book is also worth a few $$$. I was talking to a local history writer/customer/friend recently and mentioned these books. He knew them (… he owns them) and informed me that the author had passed away in the last few years and that it was doubtful that these books will ever be reprinted. I'm not sure how true that is, but it is possible that there will be no further copies published making these books just that little bit rarer. 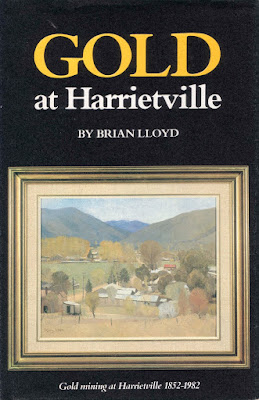 So why are Victorian Gold rush histories so desirable? Apparently if your family were here in Australia pre WWI, there is a good chance that you have some connection to the gold fields. A lot of people rushed for gold and a lot of them stayed here (Australia) when the gold (or the price of gold) ran out. Family historians are always on the look out for local histories and gold is a good place to start. I have family members (my sister in law) who's family came out from Cornwall for the gold rush. Quite by chance the first place that we know they went to in Australia, was Clunes.... and yes they are listed in the town records. There is now a bit more of an interest in my place of abode within my family and i'm sure a good local history would be appreciated due to the connection.

And of course we have Gold people. Any clues or hints are eagerly sought after by weekender detectors seeking those special spots where perchance there might be that lump of gold that everyone over the last 150 years has missed. There are those little clues on obscure and less visited historical mining activity that these diggers seek and what better place than a now out of print local history on a gold mining area.


** There's often been talk about new mining projects which seem to never eventuate.
Posted by robin at 12:42 AM