Bruce Springsteen FAQ: All That's Left to Know about the Boss by John D. Luerssen. 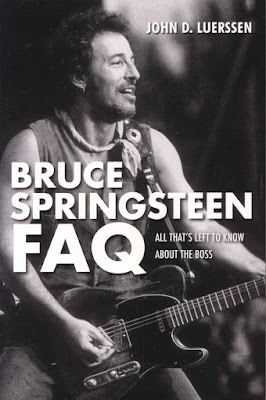 “Long before he sold 120 million albums globally in a career that has endured artistically and commercially like no other performer s in the rock era, Bruce Springsteen was a working-class New Jersey kid with a dream and a guitar.”

Over recent years I have often thought about which musician or group (living and gigging) I would still like to see performing in a live situation. The answer has always been Suicide of which Alan Vega was half thereof.  As far as I'm aware, Suicide never toured here in Australia (...correct me if i'm wrong) and now they never will. It's hard to explain how important that first Suicide album was/is if you don't know it... and there are plenty of people who if they did know it would hate it anyway...

…despite it being fairly straight down the line rock n roll... albeit with a dark primeval twist to disturb the status quo/everything. Unlike Bruce Springsteen there weren't any guitars, no stadium gigs, no 120 million sold albums, no mega stardom, just a deep respect from those in the know.

Now you're probably wondering why i'm writing about Alan Vega in a blog entry about a Bruce Springsteen book. The truth is that I don't have any books about Suicide or Alan Vega at the moment, nor have I ever come across any in my second hand book searching expeditions, but I really wanted to write something about him. Bruce Springsteen was/is a fan. He has also rather famously covered Dream Baby Dream:

A nice version... but here's Suicide.