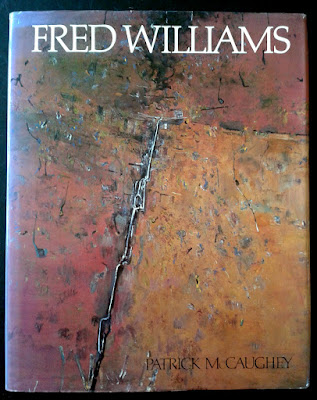 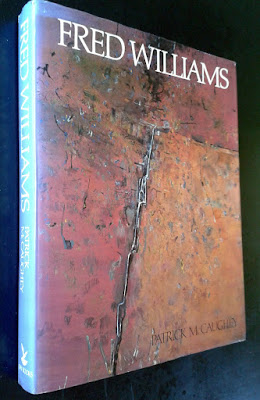 “One of Australia’s leading landscape painters, Fred Williams stands at the peak of a prolific career. Since the late 1950s, Williams has maintained consistently successful showings virtually every year in Australia and overseas. Described by leading critics as ‘brilliant but unknown’ in 1961 and ‘at his peak’ in 1977, he is nevertheless by no means as widely recognised as his considerable achievements merit. Patrick McCaughey’s study of the artist is the first comprehensive and fully researched attempt to inform a wider public of the worth and significance of Williams’s work. The author covers Williams’s career from his student days to his years of mature achievement in a text that owes a great deal of its intimacy to the ready collaboration of the artist. The many reproductions cover every facet of Williams’s work, including many items not previously shown or published. This scholarly and splendidly produced book deserves the attention of every serious student of Australian contemporary painting and its artists.” 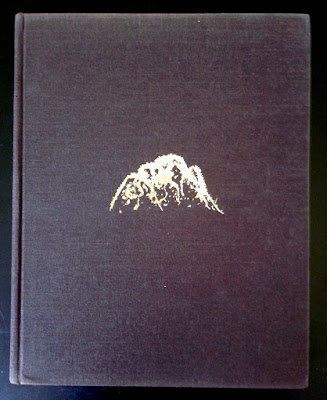 For some unknown, or relatively unknown (...actually, I do know but I don't wont go into details) reason, I remember when this book was published. I was a young bookseller working at Monash University at the time and this book was a big deal as the author, Patrick McCaughey had been up until that point the local professor of Fine Arts, having only recently moved on to becoming the Director of the National Gallery of Victoria. There was a certain buzz about the book as not only was it a local that had scribbled it, it was also considered to be an important work of art history. With all the fuss and brouhaha that was going on at the time, I remember having a good look/flick through the pages and... oh boy... I didn't like it. Nope, Freddy was not my thing in 1980. 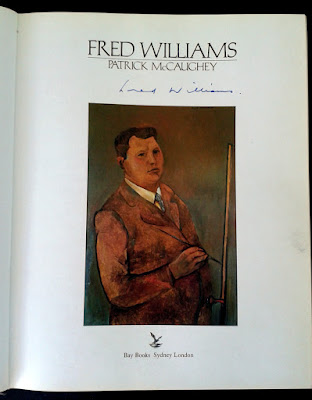 Here we are 35 years later and i'm happy to report that I now have a more positive view of the work of Fred Williams, so much so that I have even contemplated keeping this volume if it should fail to make the $$$ that i'm hoping it will sell for. The big $$$ that is. Soonish after this volume was published, Fred was diagnosed with cancer and rather sadly passed away. He did manage to sign all of the copies of a deluxe edition of which I also currently have a copy for sale, and some of the regular copies of the first edition. This is one of the lucky copies of the first edition to have passed through his hands. Later editions are all unsigned.
Posted by robin at 1:43 AM