Practical Kites and Aeroplanes: How to Make and Work Them by Frederick Walker.

Practical Kites and Aeroplanes: How to Make and Work Them by Frederick Walker. Hardcover book (no dust jacket) published by Guilbert Pitman 1903, 78 pages with some black and white illustrations. 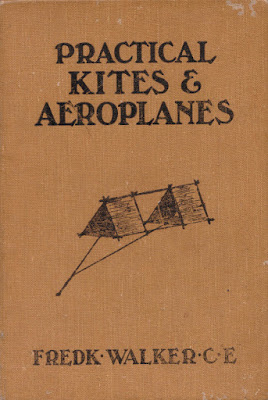 “THE kite, from the toy of a schoolboy, has, by the ordinary laws of mechanical evolution, developed into the aeroplane, capable of carrying loads vertically, and sustaining them at a certain altitude by the ordinary wind currents, but so far the airships of the future as a problem admits of no solution by the aeroplane or a aero-curve surface alone; unless it may happen to a future inventor to cause a flat disc, of gas or air, which by its inherent high pressure shall impinge upon the inner surface of an aëro-curve, and by diversion overcome gravity, and thus cause a vertical ascension. This may occur in the future, but according to our present lights (1903) a captive aeroplane may be only used for raising a single passenger, to the height permitted by the tension rope or cord and the pressure of the air current prevailing in the atmosphere. For military and other signalling purposes such a kite or aeroplane is invaluable, because of its construction affording facilities in the way of transport, without the necessity for compressed gas apparatus. Further, the comparatively easy application of an electrically released stop for a camera properly constructed to give bird’s-eye snapshots of the environment of an enemy’s movements, is yet another advantage that tends to place the kite or captive aeroplane as a useful adjunct in war time. etc”

There was a time... a long time ago... and in this galaxy... when a kite and a plane were sort of closely related. So close in fact that with a bit of imagination they were pretty much the same thing... or near enough the same thing.

This footage is of the Wright Brothers who are credited as being the first people to successfully fly a powered and sustained heavier-than-air vehicle. Yep, they built a souped up kite, put a motor in it and flew it. The year was 1903, the month was December. This is the same year that this book was published and flicking through the book it seems to me that it was published at a time when interest in, and the frenzy for flight was reaching high altitudes. The book is filled with ideas and instructions, but notably absent is any diagram that looks anything at all like what the Wright Brothers were building at the time. From the text above I would guess that the author wasn't really looking at round the world solar flights and that frequent flyer points were just a crazy notion that wouldn't be notioned for many years to come... and the author probably had no idea what an aeroplane would end up looking like having not seen what we in retrospect have seen. Military uses, that's the most obvious thing a serious kite/aeroplane could be used for in 1903, or so the author suggests. I guess the Wright Brothers changed that idea... or maybe not.