The Hitler Club: The rise and fall of Australia's No. 1 Nazi by Gary Gumpl and Richard Kleinig.

The Hitler Club: The rise and fall of Australia's No. 1 Nazi by Gary Gumpl and Richard Kleinig. Paperback book published by Brolga 2007, 427 pages with some black and white photographs. 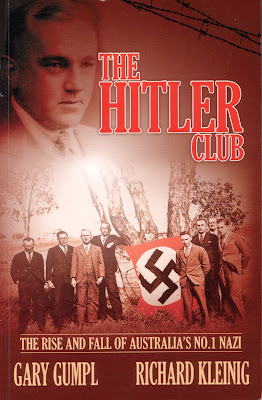 If you visit the Barossa Valley, or Hahndorf, in South Australia, the German migrant influence is fairly apparent as it is in many other parts of South Australia.  These areas were originally settled by German immigrants many many years ago, indeed, way before Adolf and his friends began their evil plans for world domination, Germans were dominating parts of South Australia.  I was in Hahndorf a few years ago and found the whole German thing a little overbearing and to be honest just a little bit too tacky for my tastes.  Yes, I like a good beer, I love a good bratwurst and I do have a passion for sauerkraut… but Hahndorf was just that little bit too much for me, as is the idea of standing around with a bunch of German National Socialists.

This book looks at a group of Germans and ex Germans in South Australia, who basically began a branch of the Nazi Party here in the land of sweeping plains.  It was the 1930s and 40s and Dr Johannes Becker was Hitler’s Confidential Agent and was regarded at the time as “Australia’s No.1 Nazi”.  What was he thinking? (Becker, not Hitler.)  I guess he was hoping for some sort of German bonding between the fatherland and Australia, or some sort of reward at the end of world domination (Adelaide?).  The Australians weren’t very happy about Nazis on home turf and locked them all up.  They also locked up many Germans who weren’t Nazis, as well as many of their descendents and anyone vaguely Japanese.

This story doesn’t end in a bunker in Berlin. Doctor Becker was interned here in Australia and was later deported to Germany (1947).  I can’t imagine that the Germans were happy to see an Aussie/German Nazi back on home territory at that particular time.  Unlike the Nazis in “Everyone Wants To Be Fuehrer: National Socialism in Australia and New Zealand”,Becker and his mates didn’t have hindsight to demonstrate to them how wrong they were, but surely they had some idea.

This isn’t the first copy of this book that I’ve had for sale and all the other copies (2 or 3) have sold.  This blog entry was begun a while ago and shelved after the copy I had at the time sold before I could blog about it.  I think this is a fascinating story and one that does hold an interest for many of us here in Australia.  The fact that I have sold it before means that I am always on the lookout for more copies.
Posted by robin at 2:25 AM