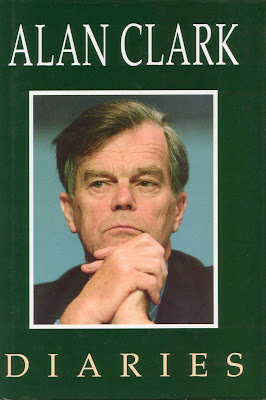 There’s nothing really that special about a 1994 edition of Alan Clark’s Diaries.  This one’s a hardcover which is nice and it’s something that is not that common a find here in Australia.  It’s fairly true to say that the Diaries of The Rt Hon. Alan Clark MP, who was a minister during the Thatcher years and beyond, do not hold that much of an interest for most of us here in the colonies.  Despite this perceived lack of enthusiasm, we here at Huc & Gabet have been actively looking out for Alan Clark’s tomes for a number of years without any luck, until I found this one.

You're probably wondering why an Australian bookseller of non Anglo Saxon descent is keen on finding the diaries of a British Conservative minister… Of course there’s a story.  A number of years ago our wonderful national television broadcaster the ABC, transmitted the BBC's production of The Alan Clark Diaries.  I like good television and this was jaw droppingly good… well, I liked it.  It was one of those TV shows where you sit there with your head constantly shaking in disbelief.  I think I guffawed out loud on more than one occasion.  Quite simply if Alan Clark hadn’t of been a real person, he would have been a difficult person to make up, at least that’s my impression of John Hurt’s performance of The Rt. Hon. So after thoroughly enjoying the absurdity of the TV show, I thought it would be a great thing to read the book(s).

I tend to not forget titles that I want for moi.  I don’t keep a list, it’s all up here in the personal hard drive.  So after all these years I finally find a copy… and it’s a hard cover (I prefer hardcovers… for the collection)… and it’s in pretty good nick.  It’s like a dream come true.  Until I find that it’s signed.  Signed by The Rt. Hon. himself.  A friend suggested that I could “…always cut out and burn the cad’s signature”, but that’s not where the problem lies.  You see as a book dealer I need to sell books, the more I sell, the less holes I have in my underwear.  I need to sell this book which, because it’s signed, is now worth considerably more than unsigned.  I don’t know if other book dealers have the same problems that I do, but I find this sort of thing very difficult.  I guess if it doesn’t sell I could then keep it… and if it does sell, well I’ll find another one and just hope that it isn’t signed. 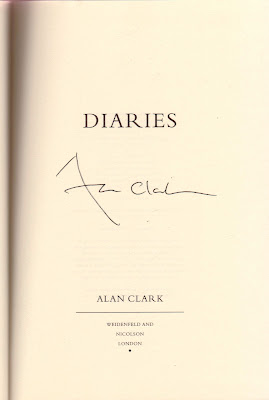