The Wagner Clan by Jonathan Carr.

The Wagner Clan by Jonathan Carr.  Hardcover book published by Faber and Faber 2007. 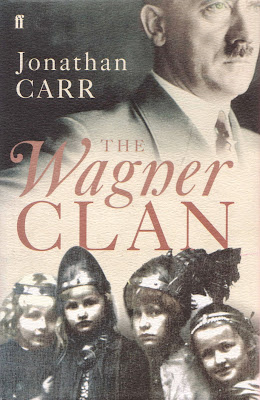 Recently the New York Metropolitan Opera broadcast the final part of the Ring Cycle, Götterdämmerung.  This was part of their series of Opera’s that are broadcast as “high-definition performance transmissions to movie theatres around the world”.  Many of you out there are probably unaware that the New York Met does this.  It’s spectacular.  Punters pay to go see the relayed opera in the comfort of their home town cinemas/theatres, at a fraction of the cost.  They even manage to screen it in Ballarat which is a 25 minute drive from my house.  I managed to catch most of the Ring except for the first part (Das Rheingold) over the last few months and thoroughly enjoyed the whole thing… except for the bits where I dozed off.  I am only human and these Opera’s are a test of endurance.  Götterdämmerung is nearly 5 hours long (excluding breaks) and I’m not that fussed that I missed a few minutes particularly of the first hour… which, by the way, the conductor claimed was the hardest part to conduct… he was probably dozing off as well.  Anyway, I thoroughly enjoyed the whole thing and would not hesitate in going to further Opera transmissions in the future.
This book has nothing to do with the New York Metropolitan Opera or its HD transmissions.  What it is  about, is Wagner’s descendants and the goings on of these people.
“Through two world wars, Nazi dictatorship and foreign occupation, the Wagner clan — Germany’s most famous family — has played host to many of the greatest and ghastliest figures in the arts and politics. Its members have clung to the helm of the prestigious Bayreuth festival and have regularly battled one another like warriors in the music dramas they stage. Their story — with its jealousy, greed, passion and intrigue — is as riveting as any opera.”
The dust jacket has a picture of Adolf on it… he was a fan.  Interestingly Richard who also had some dodgy ideas, didn’t make the front of the dust jacket but did make it to the back.  The kids on the front are the children of Wagner’s son, Siegfried.*  It’s nice that they made it to the front even though it appears that Adolph has managed to get top billing.  He was an Opera fan and hung out with the Wagner family and this doesn’t make for good publicity for the Wagner’s.  I get the feeling that this book dwells quite a bit on this.  Not that I think it was excusable, that the Wagner’s supped with the Fuhrer, quite the opposite… if you lie with dogs, you get fleas and in this case the fleas are enormous and will probably never die.
Wagner’s Opera’s are still performed today regardless of how dodgy he, his family and some of his fans were (are).  I personally enjoyed my recent viewing of ¾ of the Ring in the comfort of a local theatre and would happily do it all again.  But if Adolf was there (I don’t think he ever made it to Ballarat… as much as he tried), I’d give it a miss.
*I can’t even begin to imagine how much bullying they got at school wearing those silly hats.
Posted by robin at 1:49 AM