Anglers Knots in Gut and Nylon by Stanley Barnes. 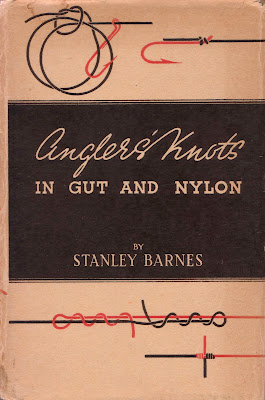 Perfect fishing weather here in Victoria at the moment… at least I think it is.  Actually I have no idea whether it is or not.  I do know that I saw someone fishing the other day which in itself is not necessarily an indicator of perfect fishing weather.  I guess it is perfect if you don’t want to stand or sit on the edge of a river (or ocean) in the middle of winter in the pouring rain.  What I’m implying here is that I have no idea at all about fishing.
As a young boy I went fishing a number of times and never caught anything… although I might of caught a cold once.  Standing around skewering worms on hooks and dragging up sticks and weeds was not an enjoyable experience for me and this activity/pastime is not something that I have pursued later in life.  There are of course those that have a great passion for fishing.  My brother is a keen fisherman and my ex brother in law was also a keen fisherman, but for me, fish that has already been caught and gutted is the way to go.
This book looks at the art of knot tying in relation to fishing.  It’s a bit of a cross over book as it considers in detail the difference between various knots tied with gut and nylon.  There's quite a bit of text and these wonderful illustrations/diagrams:

“(The author)… has performed a series of experiments in the laboratory, testing not only the various knots used by anglers but also the materials, gut and nylon, when used under angling conditions. As a result of his bench tests, he gives advice as to the knots which can be used safely with nylon, and indicates which knots, satisfactory with gut, are unsafe with the more slippery and elastic monofil. The author has applied the lessons learned on the bench to practical angling on lake and river, and gives the results of his own practice. The knots discussed are illustrated by diagrams in colour. Those which he regards as being particularly important in nylon are illustrated in detail and their history, when known, is recorded. An attempt has also been made to give a name to each knot, and there is indicated the corresponding term which sailors use for their knots in rope and twine. To the novice, the catalogue of knots and the detailed description of how to make them, should be of the greatest help. To the expert in gut who has been discouraged by repeated failures with nylon, the reason for his break may be made clear.”
I like the reference above to the “laboratory”.  For some reason I'm picturing an image of a man sitting on a river bank mucking around with knots and absolutely no image of people in a sterile room with white coats on.
No doubt there are fishermen out there who still haven’t switched to nylon and I’ve got a sneaking suspicion that they probably won’t switch at any time soon*.  This book was originally written for those people resisting the change which happened quite a while ago.  Is it still of interest?  No idea.  I’d like to think it is, but “I have no idea at all about fishing”.  Despite this lack of knowledge on this subject, I do think this book will be of interest to someone, somewhere… maybe the guy I saw fishing the other day, my brother or my ex brother in law?
*I'm not even sure that nylon is what contemporary fishing line made of.
Posted by robin at 1:26 PM