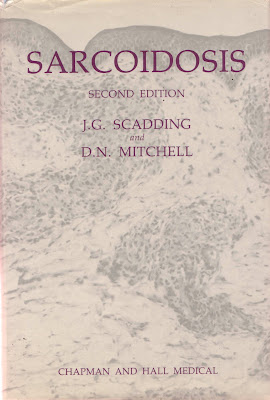 “Sarcoidosis (from sarc meaning flesh, -oid, like, and -osis, diseased or abnormal condition), also called sarcoid, Besnier-Boeck disease or Besnier-Boeck-Schaumann disease, is a disease in which abnormal collections of chronic inflammatory cells (granulomas) form as nodules in multiple organs. The cause of sarcoidosis is unknown.” Wikipedia
So of all the medical texts in the world of secondhand books why would I pluck out a book on Sarcoid?  It’s pretty dry… the book that is, not the disease.  There’s pages and pages of x-rays and photos of sick people and then there’s heaps of text… Which is page after page of more dryness.  Well dear reader, I picked up this book because I have first hand experience of sarcoid.  I have (had?) sarcoid.
Sarcoid is a fairly complex disease to diagnose and I only found out that I had it the first time my lungs collapsed.  By the time this happened a second time, I well and truely knew about it… sort of like meeting up with an old friend that you haven’t seen for a while… but with less oxygen.  It took a bit of a biopsy (which is like an autopsy… but on live people) till it was all confirmed that I didn’t have cancer… but I did have Sarcoid… doctors have such a way with words.  So a number of years of monitoring my condition and one round of steroids (never again) and here I am 15 years later and I have no idea whether I still have it or not.  I’ve got a sneaking suspicion it has simply vanished* in the same way that this book hasn’t sold.
So with my knowledge and first hand experience of Sarcoid, I purchased this book.  It’s the sort of book that I wear with pride… that’s my ability to select this book, not in regards to the having of the disease.  Of course when I found it, I had to share my excitement with someone and what better person to discuss a great book like this than with another bookseller and here’s where it gets really interesting.  I start mentioning this book to a local bookseller and don’t even get to the title and he asks, “It’s not about Sarcoid, is it?” I was gobsmacked.  Of all the medical texts and nasty insidious diseases in the world how did he know?  It turns out, that this other bookseller also has (had?) Sarcoid of the lungs and from my glowing introduction and description to this title, he guessed what it was.  I find this weird as it’s not that common a disease and it certainly is not a disease of the bookseller.
So there you go, there’s 2 people who know what Sarcoid is.  I’ve met a few others over the years who are acquainted with it but generally only medical professionals and some of those have been a little vague on the exact details.  What they need is a good book on the subject…?
*There is no cure for sarcoid but it can mysteriously just disappear
Posted by robin at 1:30 PM