Port Fairy Festival of Words 9th – 11th September 2011.
A few years ago whilst manning the Huc & Gabet stall at Clunes Back to Booktown, I was handed some information about that years Port Fairy Festival of Words, which is another book festival later in the year, here in Victoria (Australia).  My interest was aroused as sales had been reasonable and if this was achievable in Clunes well why not Port Fairy as well.  So Port Fairy was something that I began to consider.  So much so that I mentioned my consideration to a fellow book dealer who quickly poo pooed the event as being a waste of time having not sold that many books there a few years before.  So I stopped my consideration and considered the whole thing considered.
12 months later and following another Clunes Back to Booktown, I mentioned my previous consideration to another book dealer.  This time I received a different point of view.  No, the festival was not as big as Clunes or as $$$… BUT… the stall is free and you get one nights accommodation for free… and it’s a nice weekend away.  Some quick maths and I figure that this means there’s a saving of just under $400 when compared to Clunes.  You need to be there for 2 nights (Fri and Sat) so there’s still the cost of 1 nights accommodation and of course I would have to get there with all my stock (possible van hire and petrol costs).  All of this makes Port Fairy just that little bit more enticing.
So I decided to reconsider my consideration and considered that a casual visit and appraisal was required.  Last year that particular weekend of the Port Fairy Festival of Words, was the first time Clunes (which is where I live) suffered some flooding and I decided at the last minute to stay home and prepare to sandbag… which in the end was not required… but still it was a good idea to stay home.  So this year the weather forecast was good and I decided to take the drive and venture to Port Fairy for some serious consideration.
It was an early start as Port Fairy is a good 3 hours drive from here and I wanted to get there early.  So at 6 o’clock I started out and unlike last year, there was no rain.  It’s a lovely drive from here to Port Fairy through farmland and more farmland and very empty towns… but it was only 6 to 9 o’clock on a Saturday morning so it was not suprising that there weren’t many people out and about.
I got to Port Fairy at pretty much 9 o’clock on the dot.  So as I’m driving into town, I get this horrible sinking feeling that I might have gone to all this effort on the wrong weekend and even after parking my car I thought that maybe I had stuffed up big time.  This thought was due to a lack of any indication that there was a Festival happening anywhere in Port Fairy on this weekend.  I didn’t expect a welcome committee or a banner saying “Welcome Huc & Gabet” but something/anything indicating a festival would have been good.  I did finally figure out that something was happening (I don’t how this happened, but it did)… but I couldn’t figure out what and where.  Now I don’t know about you, but i was thinking that this was all a little strange, if there is a festival anywhere one would assume that there would be some sort of indication that it was happening.  There was a small market and there were a few people around… I will give the organizers the benefit of the doubt and admit that it was still only 9 o’clock.
Anyway.  I figured that best way to get some information was to phone a fellow bookseller from Clunes (Book Fossicker) who was going to be there selling.  A quick look on my phone and I realized I didn’t have her phone number.  So I look up and there she is walking into a café (Port Fairy is small enough for this to happen… but not small enough for me to figure out where all the action was).  A quick cup of coffee and we head to where all the bookselling action was.
Now before I go any further.  I should say that according to the festival programme there were many events happening over the weekend.  I wasn’t there for the events, I was there to check out the selling of books.   So we walk around the corner and up the road and there is a sandwich board outside an old cinema… I think this was the signage I had been looking for.  So Joan (Book Fossicker) mans her stall whilst I peruse the other stalls.  The thing that struck me immediately was the smaller number of booksellers than Clunes.  This Cinema was "it" for booksellers.  There were no other hidden locations.  So I now understand that when people say this festival is small, they mean small.
Here’s a few photos: 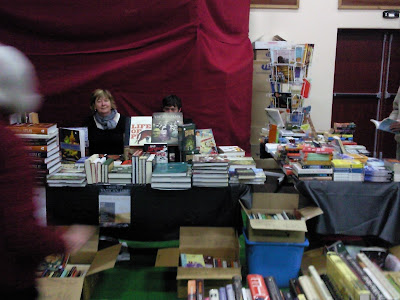 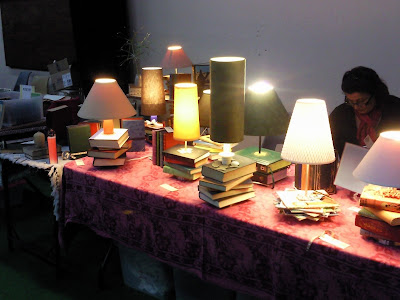 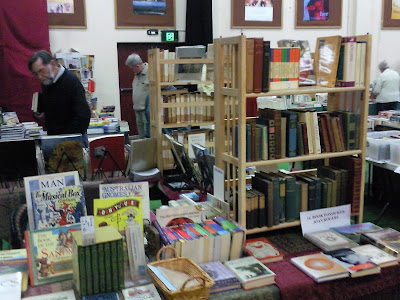 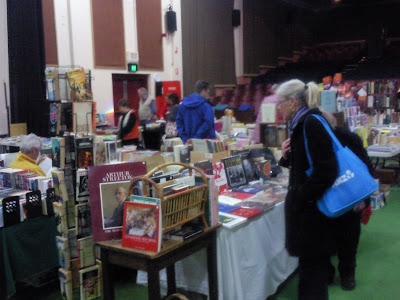 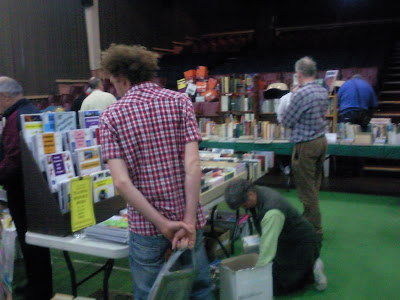 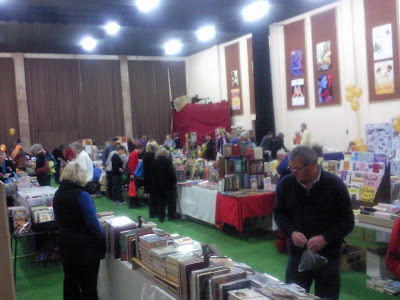 ... and that's pretty much all of it.
So my opinion?  Well Port Fairy is a long way from Melbourne (large population centre) which means that there are less people book hunting and book selling than at a book fair like Clunes, which is an easy day trip.  Port Fairy is just that little bit further and requires a bit more effort on behalf of both buyer and seller.  My information is based on my observations during a few hours in the morning of the Saturday.  I’m willing to admit that there was possibly an afternoon rush or that Sunday is really “THE” day, but it appears to me that there were not the masses of people one would hope for at a book fair if one were selling books.
All things considered, I’m still not sure whether to take the plunge next year.  Maybe the idea of a weekend away will finally persuade me.
… also... those quiet towns, were just as quiet on my way home.
Posted by robin at 2:49 PM